To support and advance the Mount Lebanon Field Hockey Program within our community and region. 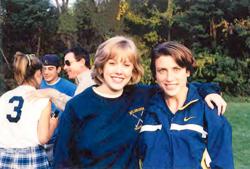 Shelley Walker (later Shelly Pieklik) and coach Mindy Dorish back when it all began.

It all started with a young girl who was looking for her classroom in a new school. Shelley Walker was transferring to Mt. Lebanon High School in 1997, and in her own words, “I couldn’t find my room, so I was wandering aimlessly around. (Teacher) Mindy Abrams came out of her room and asked if she could help me. I had gone to Sewickley Academy and she had gone to Ellis, and it came up in our conversation that we had both played field hockey.”

That was 20 years ago, and that casual conversation resulted in the formation of the Mt. Lebanon field hockey team. But it wasn’t easy. Walker (now Shelley Pieklik) said she approached the athletic director about starting a team, “But he was not very enthusiastic. He said I would have to find a teacher to sponsor it and someone who was willing to coach.  I thought, ‘Hmmm, I think I might know somebody!’” Abrams (now Mindy Dorish) readily agreed to help with the program.

Pieklik, Longuevue Drive, reflects: “When I think back on it now, I realize how generous it was of Mindy to provide her time. She was very willing to help.”

The turnout for practice that fall was around 25 girls, and Dorish, Pinetree Road, who had played at Bowdoin College, was grateful when Celia West offered to help. “Celia’s daughter was on the team, and Celia had played at Miami of Ohio,” Dorish says. “She asked if I needed some help, which I desperately did, because Shelley and I were the only ones out there, trying to teach all of these girls how to hit the ball and learn the rules. Celia came on board and she, with Michelle Lioon, another parent, ended up getting the club to develop into the team.”

The going was slow, and Dorish remembers how bad things were at the beginning. “We couldn’t score a single goal, but we didn’t care because we had so much fun. The girls were just learning the game; they really loved it, and never got discouraged.”

For the first few years, when field hockey was a club sport, the policy was that no one was cut from the team, and equal playing time for everyone was the focus. However, when  varsity and junior varsity teams were established and the team joined the WPIAL in 2001, “That was when our record began to improve,” Dorish says.

By working and refining their skills, the girls got increasingly better; in 2005 they won the WPIAL championship, beating North Allegheny 1-0 in overtime, after losing to them earlier in the season, and in the championship game the year before. They finished third in 2016.

Julie Buschman, now in her third year as varsity field hockey coach (and eighth as assistant varsity lacrosse coach), is pleased about the team’s current position. She played field hockey and lacrosse in high school in Virginia and lacrosse at James Madison University. “The program is continuing to grow and gain interest at both the middle and the high school levels,” says Buschman, Orchard Drive. “We see consistent group of returning players each year, as well as new players who want to learn the sport. We have a great group of girls this year at the high school who bring energy and enthusiasm each day.”

“That was four years ago,” Hill said. “I got involved solely as a volunteer parent, but when the team manager chose not to come back, I stepped in.”

Hill believes in what she is doing because of the long-lasting impact the sport had on her, saying her coach implanted in the team a sense of teamwork and commitment. “That carried over for my whole life.  I wanted to give other girls an opportunity to be part of a team with amazing camaraderie, supporting each other and having fun while doing it. That is the premise of what we’re trying to instill in our teams.”

That has carried over to, Pfeifer, who says she became interested in the sport because she knew her mother had played.  “I had tried other sports in the past—right before field hockey I tried archery and that didn’t go well at all.  So, my mom said, your friends are in field hockey. Why don’t you try it.” She admitted she didn’t care for it initially, “but after we had our first game I enjoyed it— I had a good time out there with all my friends, and I began to love the sport,” she says.

Pieklik’s daughter, Dottie, also plays and is the first child of an original Mt. Lebanon girls field hockey player to be on the team. “I saw so many field hockey sticks and balls sitting around in my house, and I really wanted to play because my mom started the team,” Dottie says. She and her mom practice passes in the back yard, and she likes field hockey for “the way you can control the ball, and the movements of the game.”

Pieklik is pleased to see Dottie carry on the tradition. “I swell with pride when I go to pick up my daughter (after practice) and see the girls come out with their sticks over their shoulders. I think it’s wonderful that we have this, and have extended it to the middle school.  Soccer is popular, and to be able to compete with that is fantastic.”

Mt. Lebanon currently has middle school field hockey for 5th and 6th, and 7th and 8th grades, along with JV and varsity teams. Dorish, applauds Pieklik and the others who started the team 20 years ago: “The field hockey girls should be grateful to them.”